Sawyer Squeeze vs Mini: Which Is the Best Water Filtration System?

This article pits the Sawyer Squeeze vs Mini in order to highlight the key differences between the models. I hope that it will help you determine which of these filters fits your needs best.

For most backpackers and campers, the factors that matter the most when it comes to filters are size, weight, efficiency, and obviously, price.

There are other important factors to consider, though, such as flow rate, the lifespan of the filter, and its material.

So, which is better in the Sawyer Squeeze vs Mini debate?

Jump to your preferred section!

Sawyer Squeeze vs Mini: In a Nutshell

Reasons to Buy the Sawyer Squeeze 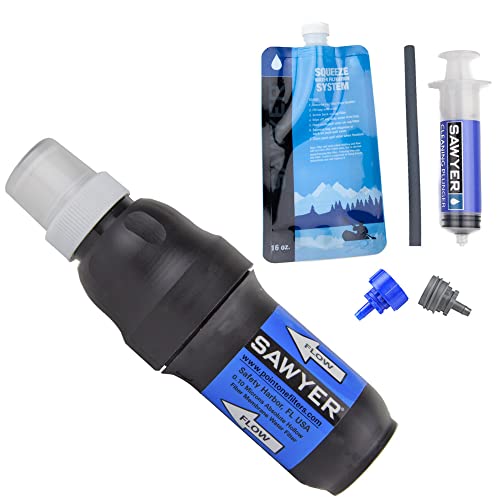 Reasons to Buy the Sawyer mini 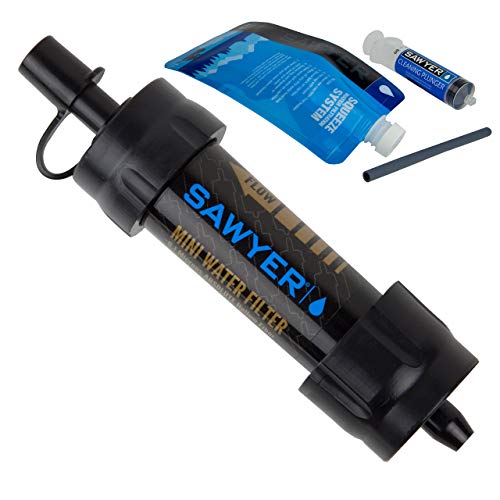 Luckily for you, however, both the Sawyer Squeeze and Mini have the same 0.1-micron pore size. In other words, they are capable of filtering out harmful elements such as bacteria, cysts, and protozoa.

Keep in mind that viruses won’t get filtered out, though. You will need a chemical treatment system for that.

The flow rate is an indicator of the volume of water that a filter can process over a certain amount of time. The Sawyer Squeeze can filter 2 liters of water per minute, while the Mini can only filter 1.1 liters per minute.

The factor of weight is obviously crucial for most if not all backpackers out there. Each item that is stored in there is essential, and every extra ounce matters. This isn’t me saying that the Mini is inherently superior in the weight department, but it still is significantly lighter.

The construction of the Sawyer Mini is smaller and skinnier than the Squeeze. Its dimensions are 5” by 2”. In other words, it can easily fit in your pocket. The Squeeze, on the other hand, is a tad bit bigger at 5 inches by 3 inches. Still, both filters are backpack-friendly and won’t take up a lot of space.

Both of these filters come with collapsible pouches straight out of the box. They can be quickly and easily be attached to their drinking pouches. You can combine the filter and the pouch to supply an empty container with water.

So, the Sawyer Squeeze vs Mini comparison, in this case, seems like a clear tie. However, the Mini comes with an attachable straw, making the process of drinking more convenient. The Squeeze, on the other hand, has a larger pouch, a feature that many backpackers out there would appreciate.

The lifespan of a filter is measured in the amount of water that can pass through it before it needs to be replaced. According to the brand, the Sawyer Mini can filter up to 100,000 gallons of water. However, in the case of the Squeeze, they failed to provide any accurate numbers. Still, numerous customers say that the Squeeze lasts for years before becoming unusable.

In case you’re wondering, the lifespan of a water filter depends on how resistant it is to backflush and how much you use it, of course.

Sadly, in regard to the factor of lifespan in this Sawyer Squeeze vs Mini comparison, there isn’t a clear winner since only the latter has a clear estimate.

Both filters should be backflushed after each use. Use filtered water and a cleaning plunger (that comes included).

You probably won’t find yourself having to clean them in the field, but it’s still good to know that the cleaning plunger is portable.

What They Don’t Do

Both the Squeeze and Mini are excellent at filtering out any biological contaminants, making them effective in most natural bodies of water in North America.

However, they both are incapable of filtering out viruses or dissolvable substances such as metals and chemicals.

So, if the body of water that you’re relying on is potentially contaminated, then you probably need to use something different.

For many people, this is perhaps the deciding factor in the Sawyer Squeeze vs Mini battle. Both filters boast similar features, but the Mini is more affordable than its sibling.

Many people gravitate towards the smaller, lighter, and more affordable Mini. Most of these users are very satisfied with their purchase and seem very excited about the water that the Mini produces.

However, some people think that the lower rate of water flow that the Mini offers is a deal-breaker. Their alternative is obviously the Squeeze with its significantly higher flow rate.

The only complaint that people have about both these filters is the fact that their O-rings tend to fall out or break. If this happens, you won’t be able to properly seal them to a bottle anymore. So, make sure to take good care of them.

Sawyer Mini: Who It’s Best For

The Mini is the perfect filter for people who will use it in inline, clear water conditions such as those found in the high alpine, for example. It’s great for inline filtering mainly because of its thin construction and hose hookup design.

But I have used the Mini in pretty good water conditions sometimes and found myself having to backflush a couple of times per day which becomes rather annoying.

With very clear water, however, it won’t be much of a problem. The flow rate is not as high as the Squeeze, but it will do the job just fine. However, with average water conditions, this filter suffers a lot hence why I stopped using it.

With the introduction of the Micro Squeeze, the Mini sees less and less use as people are opting for the Micro and Squeeze instead.

bUY THE sAWYER MINI FROM aMAZON.COM

Sawyer Squeeze: Who It’s Best For

At around 3.25 oz wet, the Squeeze is 46% heavier than the Micro and about 33% faster. In other words, the increase in flow rate per increase ounce isn’t the same as the Micro over the Mini. Still, it performs a lot faster than both and is by far the best option, even in less-than-ideal water conditions.

People might opt for the Micro instead because of the decreased weight and more compact design, but this still doesn’t change the fact that the Squeeze is the fastest filter out of the bunch and the best one at dealing with average and below-average water conditions.

bUY THE sAWYER squeeze FROM aMAZON.COM

1 thought on “Sawyer Squeeze vs Mini: Which Is the Best Water Filtration System?”

My name is David, and I’m the fastest man alive (but only when it comes to churning out quality articles and reviews).

I love writing about things that I like, and boy, do I LOVE the great outdoors, which is why I'm dedicating my time to helping you make the most out of your outdoor adventures!

SherlingLake.com is a participant in the Amazon Services LLC Associates Program, an affiliate advertising program designed to provide a means for sites to earn advertising fees by advertising and linking to Amazon.com.

This website uses cookies to improve your experience while you navigate through the website. Out of these cookies, the cookies that are categorized as necessary are stored on your browser as they are essential for the working of basic functionalities of the website. We also use third-party cookies that help us analyze and understand how you use this website. These cookies will be stored in your browser only with your consent. You also have the option to opt-out of these cookies. But opting out of some of these cookies may have an effect on your browsing experience.
Necessary Always Enabled
Necessary cookies are absolutely essential for the website to function properly. This category only includes cookies that ensures basic functionalities and security features of the website. These cookies do not store any personal information.
Non-necessary
Any cookies that may not be particularly necessary for the website to function and is used specifically to collect user personal data via analytics, ads, other embedded contents are termed as non-necessary cookies. It is mandatory to procure user consent prior to running these cookies on your website.
SAVE & ACCEPT